A busy week of Christmas preparations this week! We videoed our part in the school video, as well as creating our own little Year 6 play based on the Christmas Truce. In Maths we have covered geometry, using 4 quadrant grids and translating and reflecting. In English we wrote up our information texts about the truce and spent time editing this week. This week the Puffins have been further investigating circuits using formal write up methods using Queen Penelope Hates People Munching In Church (ask them to explain what this stands for). Using Christmas tree templates (and star), they had to come up with their own investigation. Some chose to create the brightest star on the tree, whilst some chose to create a set of Christmas fairy lights. In French this week we put all of our knowledge from this year and Year 4 together and wrote letters to our French penpals! We cannot wait for a reply! We also got a reply from the Ministry of Defence this week regarding our Walter Tull letters. Although we didn't get the answer we were hoping for, it made us realise the power of letters!

After a short week last week, it has been lovely to be back to school again! This week we began our new Christmas in the Trenches information text. We researched, used our VIPERS skills for different sources and looked for features such as generalisers. In Maths we finished our fractions topic including finding fractions of amounts and BIDMAS! In French we created sentences about the school. In computing we created our own point scoring race track games. What amazing programmers we have in class 6 with everyone getting onto the extension! In music we have been creating compositions with glockenspiels - now we even know what a dotted minim is! In P.E we developed our handball skills for mini games; this week we applied different tactics using a lucky dip! As the playground was so icy, we went on the field (but left out the dribbling option!) In History we looked at different perspectives about the truce. We created amazing red decorations for our school rainbow tree for the church competition, choosing between Santas, stockings and shapes. Getting into the festive spirit, the decorative homework has been coming in, as well as an advent lucky dip for everyone to enjoy from a kind class member! We have also been rehearsing for our Christmas in the Trenches re-enactment! Watch this space!

This week we have continued our fractions topic, multiplying fractions by fractions and fractions by integers (whole numbers). We have been writing our spooky stories in English and developing our dialogue, revising our commas for clauses and using adventurous openers. Ian, from KIC theatre, visited and we dramatised Christmas in the trenches. We were really impressed by the children's empathy throughout. In P.E we have been developing our handball and hockey skills, building up to mini games. In Science, we investigated our circuits including bulb brightness and buzzer volumes. We enjoyed testing in the dark and using data loggers to record! In French, we have been naming places around the school and created fantastic bird's eye view maps in French - multi-tasking! In music we used the glockenspiels for our very popular Fresh Prince of Bel Air raps! Also, in computing we have been using Kodu to create worlds.. which even included very impressive volcanoes!!!! On Friday we enjoyed dressing up for Children in Need... who knew Year 6 could scrub up so well?! Very smart! Miss Smithson even wore a bridesmaid's dress! Keeeeeeep dancing!

Circuit investigating.. can you spot us?!

Christmas in the trenches 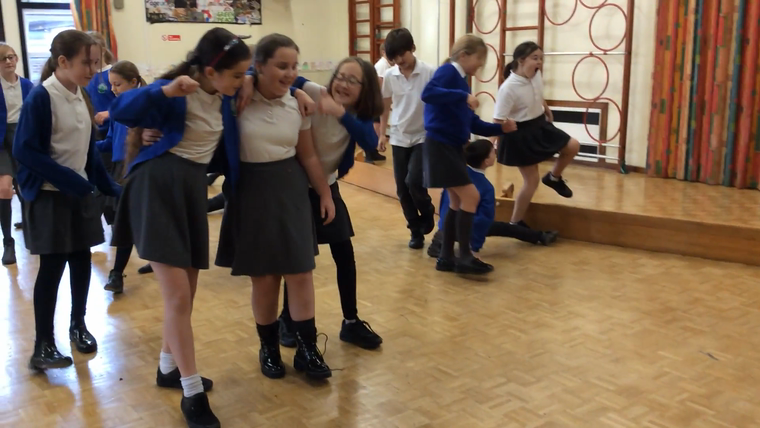 This week we have continued our fraction topic in Maths, including adding and subtracting fractions by finding the LOWEST COMMON MULTIPLE. In English, we began exploring spooky stories in the outdoor classroom and planned our own story. We had to make sure it included a protagonist that you could root for, a spooky setting and a twist at the end. We have also been improving our dialogue, even including adverbial phrases and dashes. In P.E we have developed our hockey skills (360 turns!) In Science we began our circuit topic and had a go at using different electrical components. In Computing we have begun our programming unit through Kodu. We have been INCREDIBLY PROUD of year 6 this week as they took part in a very moving Remembrance Service at the Lyminge memorial on Thursday. After the service, the children went into the church to find a soldier statue and sit in the pews to light a candle. Year 6 keep impressing us with their impeccable behaviour as they act as fantastic role models for the rest of the school.

This week we have begun our fractions topic. In English, to link with our WW1 theme this week, we have planned and written very emotional free verse poems. We even had a go at performing them with instruments. We have spent some time rehearsing for our Remembrance Service next week, as well as painting poppies and researching soldiers from Lyminge who died in the Great War. It was really fascinating finding out where these soldiers resided and also their different roles during the war. This week we also listened to and appraised WW1 songs! very catchy! We also started our hockey and handball skills in P.E. Some Year 6 children have been lucky enough to be picked to sell poppies, etc this week too for the rest of the school.