This week in maths we have looked at numbers with 3 decimal places and how to round to the nearest tenth and whole. In English, we completed our rhyming poems and learned about performance poetry with the help of Michael Rosen! We enjoyed acting out our poems and performing them to the class on Wednesday. In P.S.H.E we learned about body image and the importance of being kind to ourselves and in R.E we discussed the last supper and what it represents for Christians. We enjoyed some final matches in hockey and learning some Easter vocabulary in French. In art, we created some fantastic Easter bunnies and on Friday we enjoyed a day of Easter fun - including our service and bonnet competition. Have a super holiday everybody!

Playing our recorders in worship!

English: What is performance poetry? Can I celebrate and share my work?

P.S.H.E: What is body image and how can we speak positively about ourselves?

This week in English we have enjoyed looking at poetry by Shel Silverstein. We have read 'If the World was Crazy' and drafted our own versions using rhyming couplets and lots of 'whacky' ideas which has been great fun! In maths we have moved onto our learning about decimal numbers and how to convert these to fractions.

We took part in a music workshop at the beginning of the week which was lots of fun. We have been mapping the seven wonders of the world in geography and formatting admission tickets for one of these in computing. In art, we created our own self portraits in the style of Ed Fairburn and in science we explored the effects of friction. We learned to talk about what is inside our homes in French and enjoyed some sunny P.E with Mr Day and Mrs Wolfram.

Art: Self -portraits in the style of Ed Fairburn 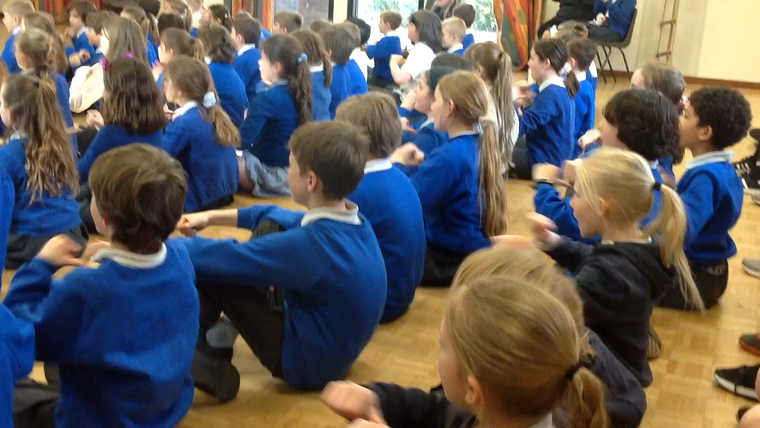 Science: Exploring the effects of friction...

Geography: Mapping the seven wonders of the world...

This week in maths we have completed our fractions unit, learning how to calculate fractions of amounts and problem solve! In English, we have re-told the folktale 'The Old Woman and the Pumpkin' with our own twists and turns!

On Monday, we celebrated Mars Day as part of British Science week. In R.E we explored the concept of shared responsibility and linked this to the Easter story. In geography, we worked on our atlas skills - identifying human and physical features. In computing we developed our skills on Publisher using pre-set templates and adapting them for purpose. In art we continued to explore pointillism and in French we learned to discuss our homes.

Friday was all about celebrating red nose day! We had such a brilliant day with lots of fun activities. Photos of the netball match, jokes competition, dodgeball and Year 5 talent show can be found below! There was lots of smiles and lots of money raised for a great cause! :)

This week in English we have been learning about stories from other cultures. We have been reading ‘The Story of the Old Woman and the Pumpkin’, a Bengali folktale, and learning about how tales can change over time. We have revised our understanding of inverted commas for speech and modal verbs. In maths, we have been learning to multiply fractions by whole numbers and calculate fractions of amounts. Year 5 are fraction superstars!
We learned to play ‘Dragon’ on the recorder using all 5 of our notes in music and tested out our parachutes in science to find air resistant materials. In geography we learned about symbols and grid references and in computing we created webpages on Microsoft Publisher with Mrs Wolfram. Year 5 enjoyed some Olympic themed dancing with Mr Day and some competitive matches in hockey with Dave. In art, we used pointillism in the style of Georges Seurat and Ed Fairburn - drawing and painting our own globes. In PSHE we learned all about emergency aid. We also enjoyed a KS2 choir workshop this week which was great fun!

It's been another very busy week! In maths, we have learned how to add and subtract fractions with different denominators - moving on to use part-whole models to add 3 fractions together! In English, we have planned and written non-chronological reports exploring our own 'Where in the world?...' questions.

In science, we have started to plan our own investigation exploring air resistance. Next week, we will test which potato parachute is most effective! In geography we learned about the U.K, British Isles and surrounding seas. In P.E we enjoyed some colourful dance with Mr. Day and worked on our passing skills in hockey. In computing, we used formatting tools on Microsoft Publisher to write about our favourite authors. Book day was great fun and we enjoyed illustrating in the style of Quentin Blake for art. In PSHE we continued our learning about peer pressure and gave Jigsaw Jez some great advice when he was being told to drink alcohol underage by a very naughty cat! In French, we learned how to  speak about animals on the farm and even how to imitate noises in French! Je suis une vache - meuh meuh! Any ideas!?....

This week we have had lots of fun exploring our new big question! Geography learning involved flying around the world on a 'lucky dip' holiday using Google Earth! We learned about digital mapping and how to describe physical features of a given location. In music, we learned how to play note D on our recorders and applied this to the playing of 'Mary had a Little Lamb'. In P.E we enjoyed hockey with Dave and ball games with Mr. Day in the sunshine. In art, we completed an artist study on Ed Fairburn - an English artist who combines mapwork and portraiture. We experimented with drawing on paper maps in his style and were very impressed with the creativity in the room! In French we have learned to talk about our family tree and in science we learned all about air resistance with a whacky experiment outside!

In maths this week we have been learning all about fractions! We have learned to convert between improper and mixed number fractions and how to order and compare fractions too. In English, we have been identifying the features of non-chronological reports - revising our understanding of the formal tone, shifting tenses and using parenthesis.

What a busy week!